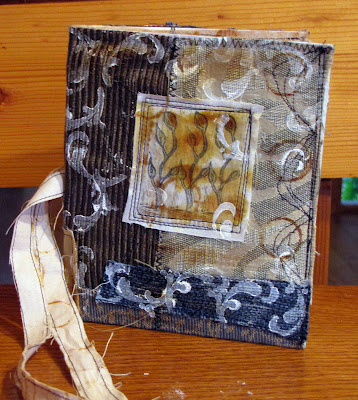 I created this grungy folder to help me in learning to draw loose pen drawings. 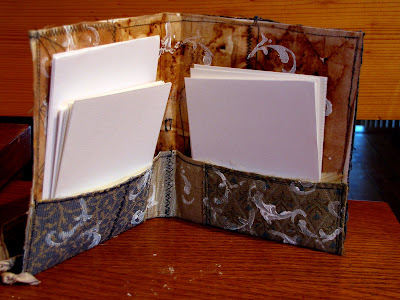 Inside it has pockets full of paper that I am going to draw on. I have been really wanting to learn to draw with pen, and just sketch for the fun of it. But I haven't been able to do it in a book, because I have this fear of messing up a nice book (I know it's dumb!) To let myself try to sketch with pen, I created this grungy folder that is already messy, and the pages are loose inside. If I really don't like how a drawing turns out.... well I can just throw that page away. 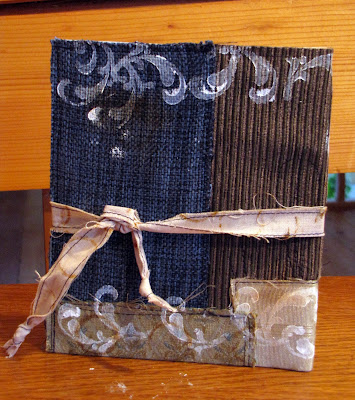 and the ones that I am okay with keeping will all be neatly contained within my grungy folder.
Posted by Kim Henkel Creations at 10:01 AM 5 comments:

I had so much fun making this collage. As part of the on line course I took with Misty Mawn, we worked on collages. 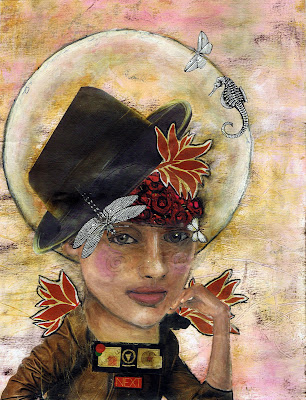 It took me a lot of time to create this collage, but it was loads of fun! The course was called Stretching Within, and this piece was really stretching for me, as I haven't done much collage before... and it took me lots of time moving pieces around to get it just like I wanted. When I finally decided on the layout, and glued everything down, I added some paint and ink to try to join things together.
Posted by Kim Henkel Creations at 10:00 AM 2 comments:

Email ThisBlogThis!Share to TwitterShare to FacebookShare to Pinterest
Labels: Stretching within 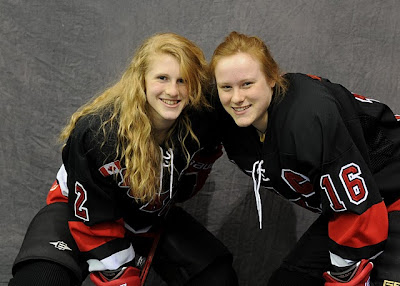 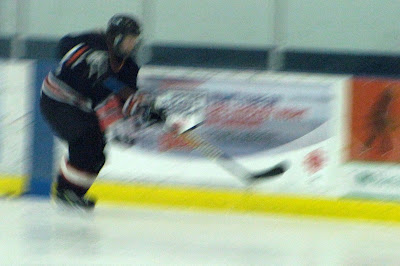 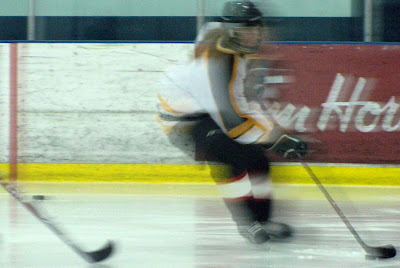 I am very proud of them, and wish them a wonderful experience at the games no matter how lopsided the scores may be.
Posted by Kim Henkel Creations at 11:11 AM 2 comments:

I have been asked by a few people to demonstrate how to make a little accordian book..... and so here it is. 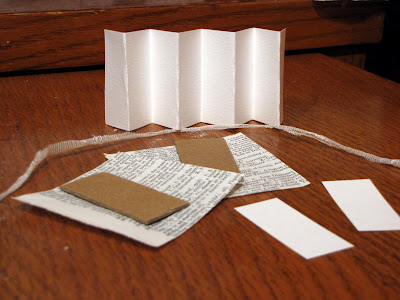 I start with a piece of 90 lb. watercolour paper that I cut and fold accordian style to the size I want. I cut two piece of thick cardboard (the back of the watercolour pad) the same size (or a smidgen bigger) than the folds, and two pieces of water colour paper a smidgen smaller than the cardboard. I gather two small pieces of thin paper to cover the cardboard, and a piece of material (cut thin) or string to use as the wrap to keep the book closed. 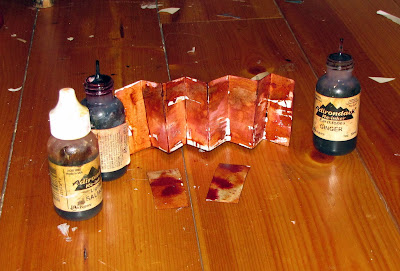 Next I colour the folded paper (both sides) and the pieces that will be on the cover (one side). I use water, ink or paint and make a mess. (How fun!) 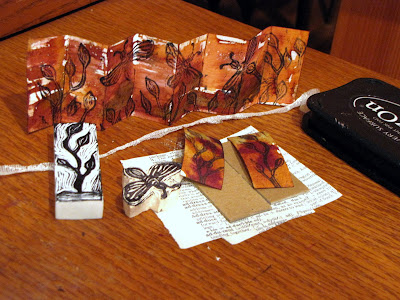 Next (once the paper is dry) I stamp using either commercially purchased stamps, or in this case stamps I carved. 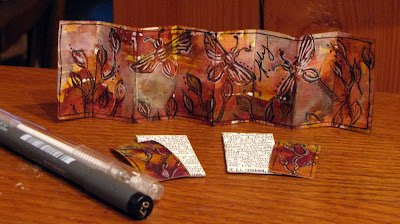 Using a white gel pen and a black felt pen I outline or mark up the stamps and design in whatever way I want. I also glue the paper on to the cardboard covers, and wrap and glue it around the edges. I then glue the decorated bits to the outside of the cover, added the strip of fabric for the tie to the back of the cover and glued the covers to the wrong side of the end accordian fold (not sure that makes sense, but try it and I'm sure you can figure it out!) 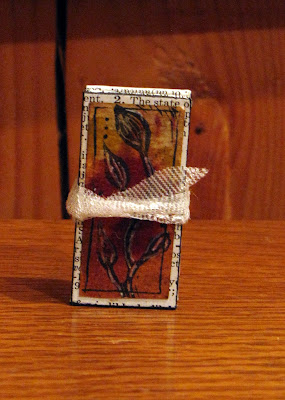 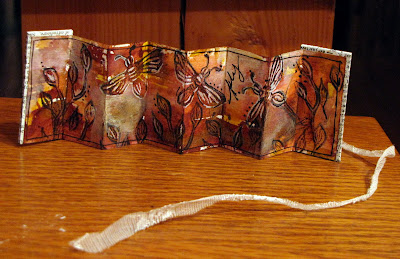 and when it is open.
Posted by Kim Henkel Creations at 11:11 AM 5 comments: 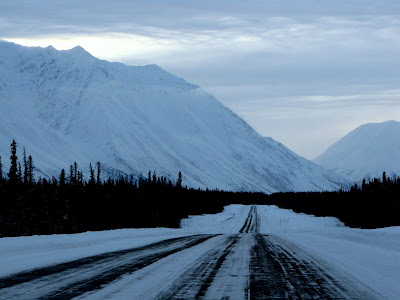 I snapped this picture through the car window on our drive home today. It was taken only a few miles from where we live. Our family spends many hours in the car, - but when the road is good, (as it was today), and the weather is okay, and there is no wildlife on the road we don't mind the drive.
It is a gift my husband and I happily give our daughters who play hockey 100 miles (160 kms) from where we live. We make the round trip drive 4 times a week, and have done so for many months. So tomorrow when I don't have a hand made valentine card for them... 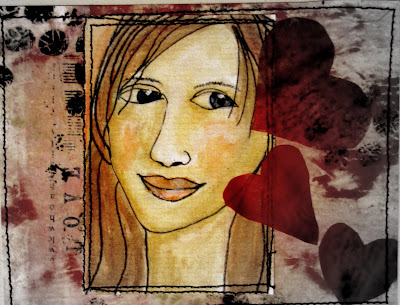 I know that they will both understand. (these ones were from a few years ago)

The online course I am taking with Misty Mawn is called Stretching Within. I have been working hard to stretch and work differently. But I realized that it is also important to remember the 'within' part, and make sure that I enjoy what I create, and that it is part of me. I struggled so hard with the journal page I posted on my last page.... and so I wanted to create another journal page, but one that I had more fun making. 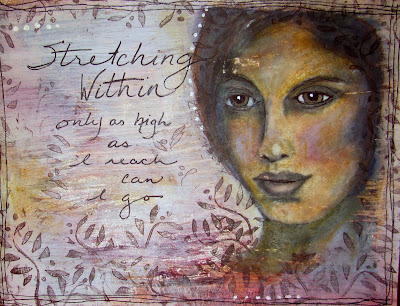 and so I created this page. It was stretching as I did it fairly fast and free - not worrying about how it would turn out, or over thinking what I was going to do. I knew it was going to go into my journal, and it didn't really matter how it turned out, that it was for me. I used more of my own style of creating - I transferred a copy of a drawing I made, and added some colour (ink) and some paint, stamped on it using my hand carved stamp, and then added some pen outlining and some words .... stretching, but still using what is me, and what I enjoy.
I will continue to work at stretching, but ensure to enjoy it, and make it part of me.
Posted by Kim Henkel Creations at 7:11 PM 3 comments:

Email ThisBlogThis!Share to TwitterShare to FacebookShare to Pinterest
Labels: journal page, Stretching within

The World is so Rich 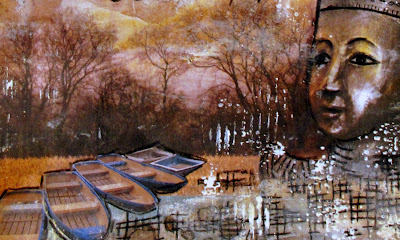 In my online class we are supposed to be working on journal pages. This has been difficult for me... almost scary. I wonder why? If I think about it, it is because I love looking at people's journals, and I have wanted to create journal pages of my own for so very long, but never have. And so this week I have procrastinated - my life is very busy, and I talked myself into never having enough time to focus on creating a page. I am fairly slow at everything I make, especially when it is something new. It took me all week to find the courage to give it a try. I still only had bits and pieces of uninterrupted time....but I finally have created my first journal page! 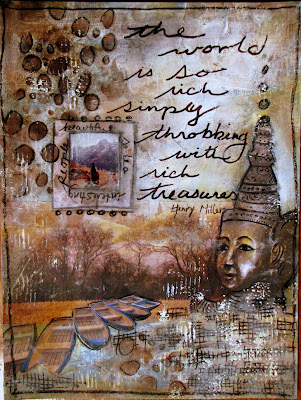 I don't LOVE it, but it is okay, and for a first I am satisfied. It has many layers under what you actually see here, and the colour is a bit off in this picture, but it was the closest I was able to get.
The world is so rich, simply throbbing with rich treasures, beautiful soles, interesting people.
Henry Miller

Posted by Kim Henkel Creations at 5:18 PM No comments: 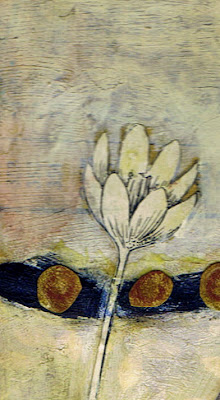 I am working on a collaged painting (learning how from the course with Misty Mawn). It has been a while in the making, and it still feels unfinished because it is wordless 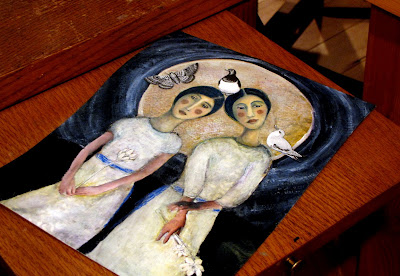 The unfinished piece sat beside me as I worked on other things last night, and I kept moving things around. 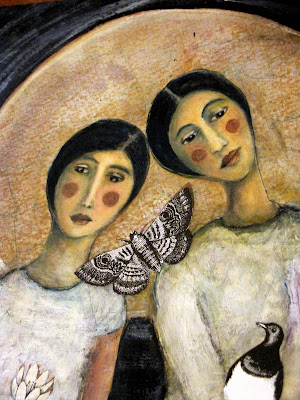 I couldn't figure out how to finish this piece, I just knew it wasn't right yet.... through the night I woke and thought about it, and at my day job it kept popping into my head, and I kept pushing it away. 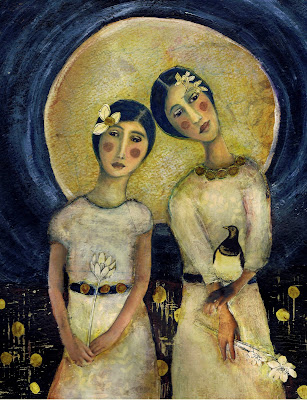 Tonight I just sat down and started to play, and things came together. I feel that it is finished except for one thing.... it needs some words - but I don't want to rush the words - they will come, and I will finish. If you have any ideas of a few words I should add to it, please let me know!
Posted by Kim Henkel Creations at 8:07 PM 9 comments: 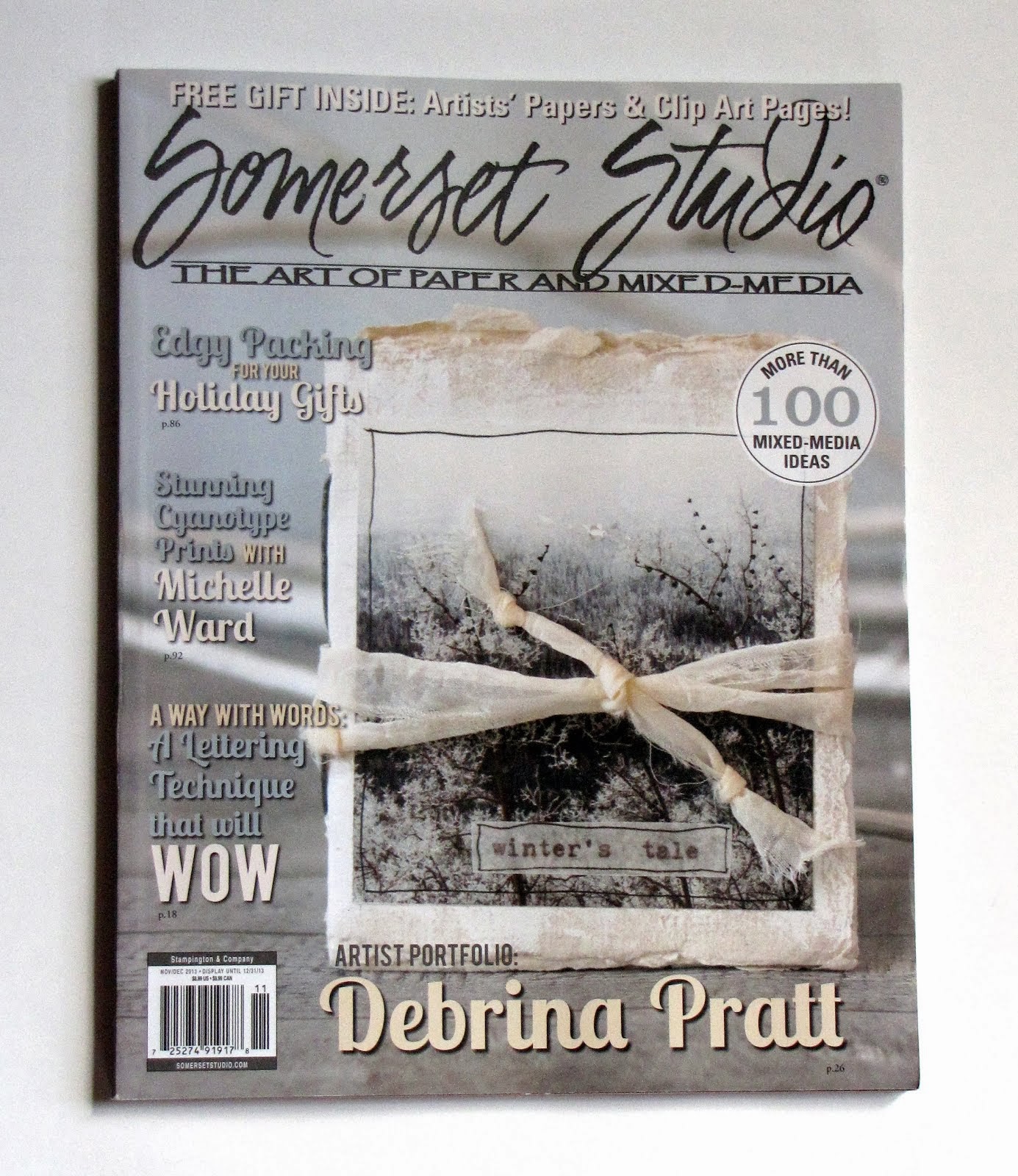 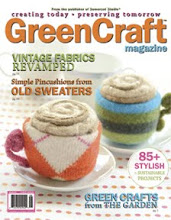 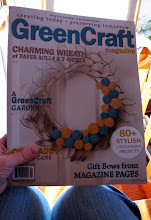 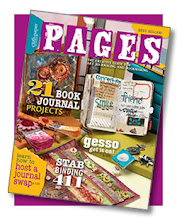